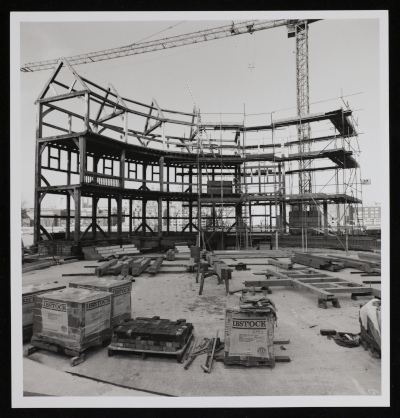 Explore two decades of pioneering theatrical experiment from the archives of Shakespeare's Globe.

Shakespeareâ€™s Globe Theatre is a â€˜best guessâ€™ reconstruction based on modern scholarship of the 1599 theatre of the same name that William Shakespeare part owned, wrote for and played in. The new theatre stands not far from the original Globe on London's Southbank. It aims to recreate the playing conditions for which Shakespeare wrote with an aim of deepening understanding of the plays by experiencing them in something approaching their original context with the theatre open air, much of the audience standing and sharing light with the actors.

Shakespeareâ€™s Globe Archive: Theatres, Players & Performance documents the performance and construction history of the new Globe and the indoor theatre space of the Sam Wanamaker Playhouse.

The material in this archive will be essential to any students or researchers interested in Shakespeare in performance, theatre history, early-modern theatre and the cultural history of Shakespeare.

The reconstruction of Shakespeareâ€™s Globe was built close to where the original stood on the south bank of the Thames in London. The impetus to build a reconstruction of the Globe came from the American actor Sam Wanamaker, who founded the Shakespeare Globe Trust in 1970 alongside the Shakespeareâ€™s Globe Museum. Over the next few years the nature of the possible building, both its design and construction techniques, was rigorously researched to create the â€˜best guessâ€™ structure we see today. The first sections of the reconstruction were completed in 1992 and the theatre officially opened for business in 1997. Shakespeare's Globe has been staging plays by Shakespeare, his early-modern contemporaries and contemporary playwrights ever since.

In 2014, an indoor theatre, The Sam Wanamaker Playhouse, based on the original Blackfriars Theatre, was opened next to the Globe, recreating the conditions of early-modern indoor theatre with performances lit solely by candle.

Education is central to the Globeâ€™s work from schools to higher education and these theatres are a testing ground for discovering and communicating more about the plays as theyâ€™re performed in the Globeâ€™s specific spaces.

Read more about Sam Wanamaker and the history of the Globe, both old and new, on the Globeâ€™s website and watch Patrick Spottiswoode, Director, Globe Education, discuss the theatre.

This project makes available material from the Shakespeareâ€™s Globe performance and architectural archives. The performance archive shows how productions at the reconstructed Globe and Sam Wanamaker Playhouse were conceived, rehearsed, dressed, marketed, sound tracked, how props were used, how the audiences behaved and the theatre history and performance lessons that were observed and learned. The architectural archive contains material on how the reconstruction of the theatre was designed and planned and some of the conversations and debates that informed construction decisions.

In addition, there is also material on the theatreâ€™s annual reports, communications to its supporters and oral histories detailing some of the early history of the reconstructed theatre.

The documents of the Globeâ€™s performance archive primarily deal with productions from the opening of the theatre in 1997 to the end of Dominic Dromgooleâ€™s tenure as Artistic Director in 2016. It includes materials on â€˜Original Practiceâ€™ productions that attempted to recreate the acting methods and costumes of Shakespeareâ€™s time. It also includes material on performances at the Sam Wanamaker Playhouse from 2014-2016. The architectural material includes plans from the 1980s onwards and there are also oral histories discussing the theatreâ€™s early days.

The collection contains information on around 170 different plays, concerts or events and over 400 different productions of these plays.

The archive divides into 14 main collections of document types:

Prompt Books: the stage managersâ€™ notes that documents how a performance was staged and arranged.

Wardrobe Notes and Jottings: containing information on how actors were dressed and costumes conceived and designed.

Props: photographs of a selection of props used in productions. This also includes 360 views of some objects.

Programmes: the information and ancillary essays that accompanied performances plus cast and creativesâ€™ details.

Posters: the imagery and artwork used to publicise productions.

Annual Reports: administrative information on the year including financial results.

Around the Globe: the quarterly magazine sent to supporters of Shakespeareâ€™s Globe.

Architectural Material: plans for the building work, correspondence and papers researching the construction and photographs of the building.

Oral Histories: interviews with people involved in the early stages of the Globe project.

Read essays and watch videos by academics discussingÂ theÂ work of the Globe.